before breakfast we talked about the furthest visible point before it all disappeared
Cathy Haynes, Fay Nicolson, Kentaro Yamada, Andrea Zucchini, The School of the Event Horizon
27 June - 26 July 2014
Exhibition, Tenderpixel, London, UK (Curated in collaboration with Borbála Soós) 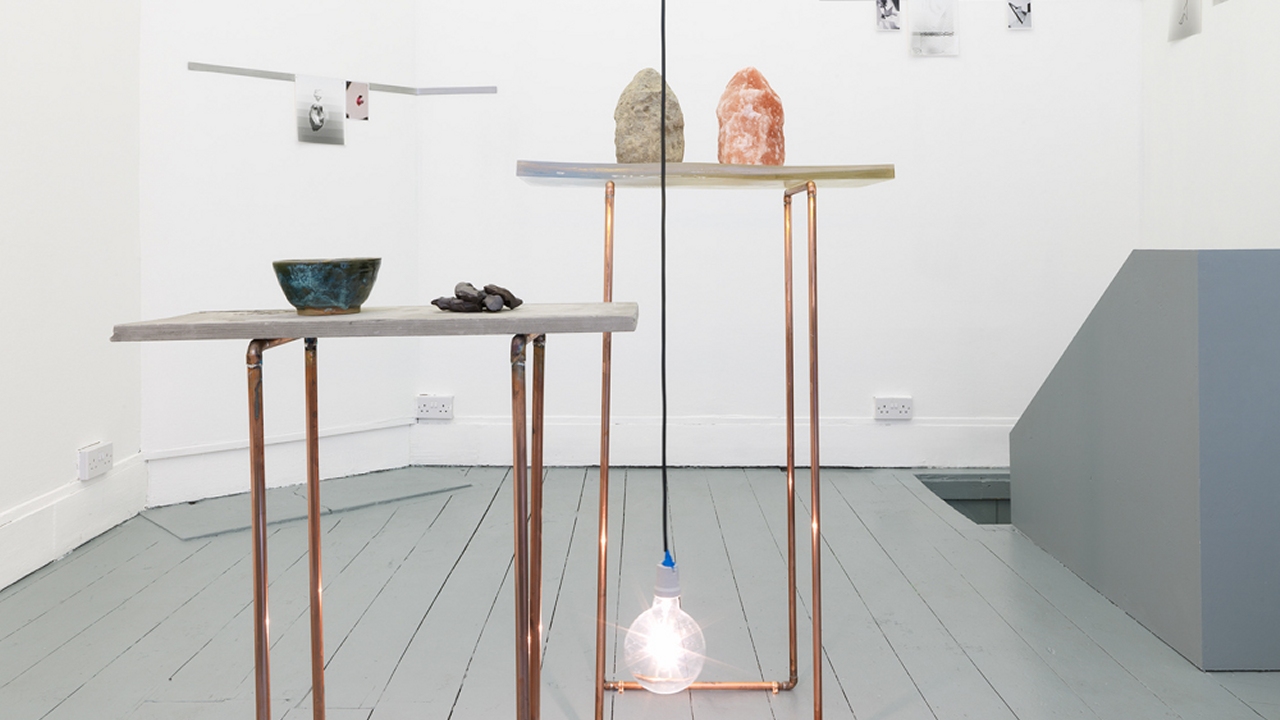 Kentrao Yamada, Cathy Haynes, Fay Nicolson. Tenderpixel.
The exhibition examines the construct of objects that are informed by a relation to space, time and materiality. According to Bruno Latour, objects exist in the axis of their networks and bring with them a sense of connectedness, or an expanded anamnesis triggered by their ambiguous qualities.

Anecdotes and elective affinities between art, alchemy and history inspire an open conversation within the exhibition. Scientific dogmas and beliefs in supposed elements reinforced by philosophy or religion slowed down the discovery of certain rules of physics and chemistry. Some widely accepted hypotheses of the current age, especially regarding cosmogony, predictably also await to be refuted. 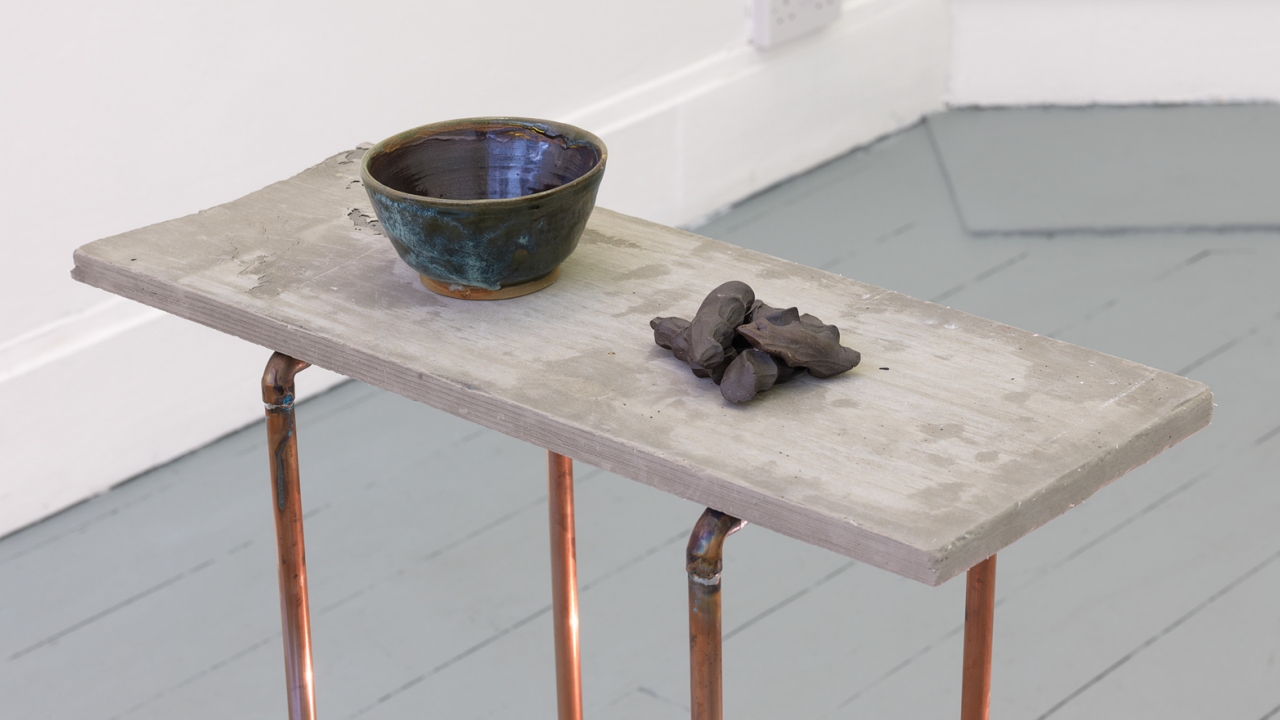 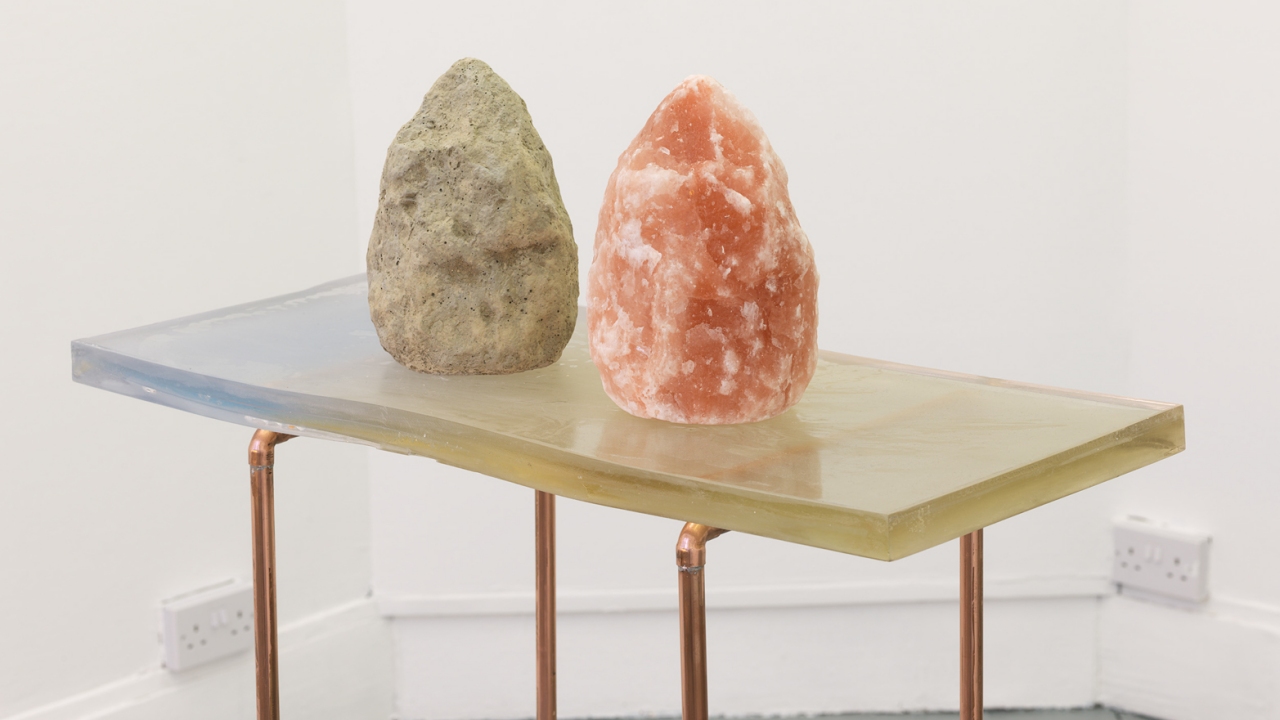 Kentaro Yamada. Photo by Original&theCopy. Tenderpixel Gallery.
Time has been extensively crucial to the research paths of objects’ (pre)existence. In this framework, time is a metaphor, intangible or somehow unthinkable, almost like an assumed, although never quite proven element. The show addresses ideas around time and objects to make something visible that eludes perception, thus giving the impalpable a form. 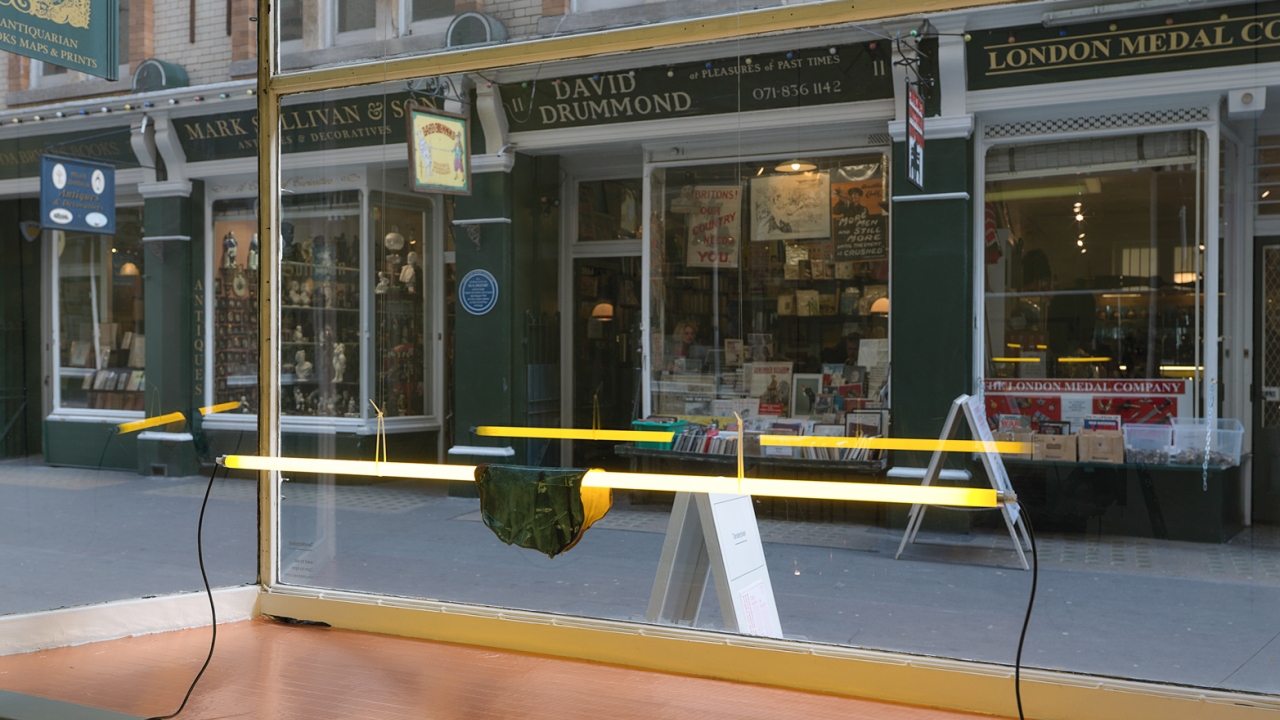 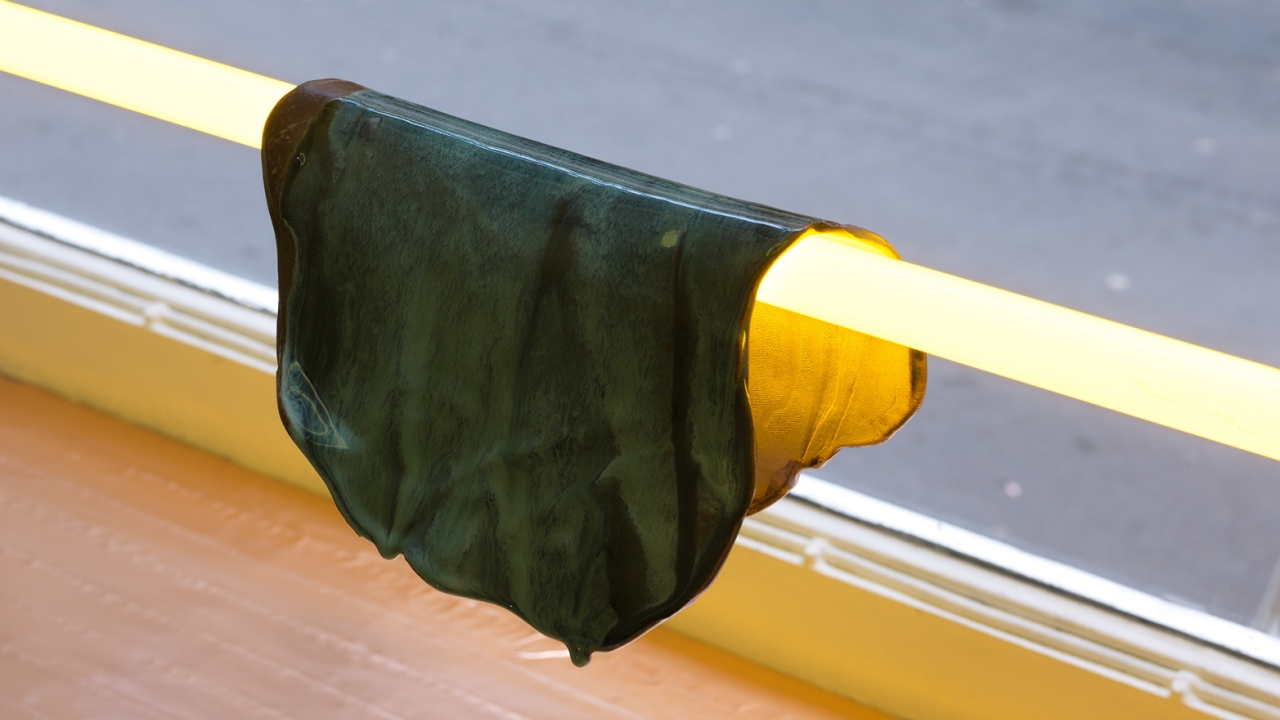 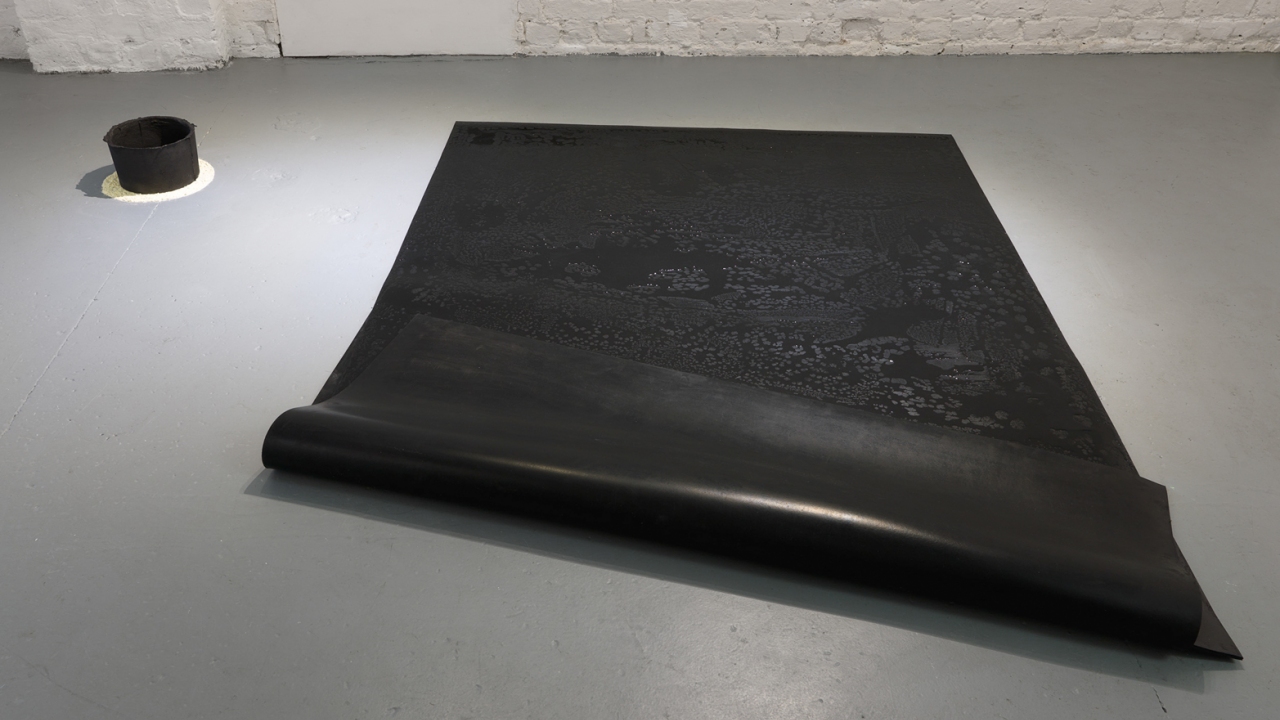 Andrea Zucchini, When Cortes Asked the Aztec Chiefs Where They Got Their Tools From, They Simply Pointed to the Sky. Tenderpixel Gallery.
'Let us in fact make a theoretical reconstruction of an imaginary object, basing our work on fragments of unknown function and uncertain origins. Whatever emerges from this we will not know exactly what or is, or what world it belongs to.'
– Bruno Munari: extract from Arte come mestiere (Design as Art)


Holding reference to the oscillation between two or more different states as the pieces foreground the fleeting and the unknown, they exist in the threshold between appearance and disappearance and point to a sphere beyond the immediately visible: be it a dream, a potential second part, or another manifestation of the material that had a different set of connotations at one point in history. 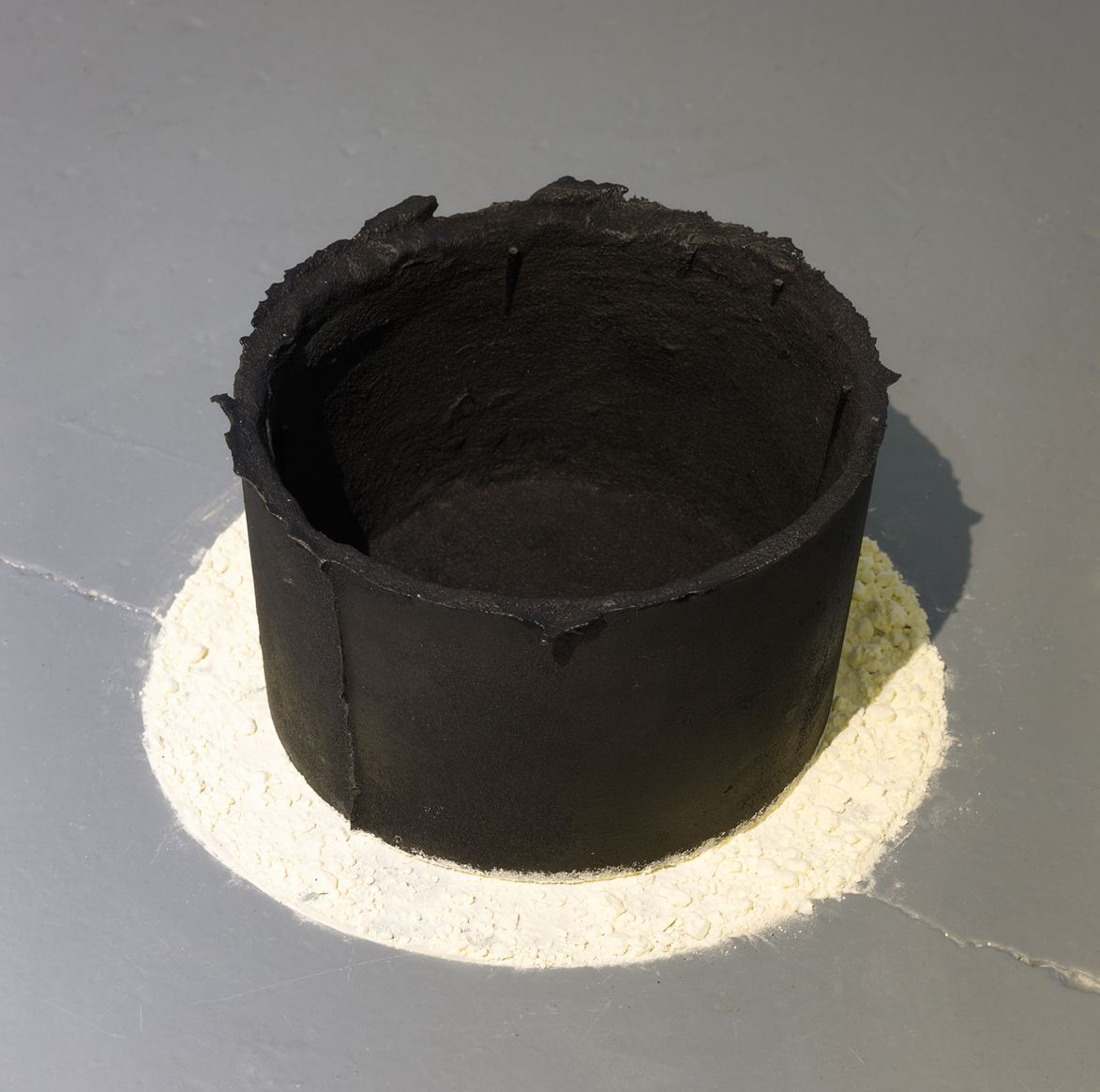 Andrea Zucchini, When Cortes Asked the Aztec Chiefs Where They Got Their Tools From, They Simply Pointed to the Sky. Tenderpixel Gallery. 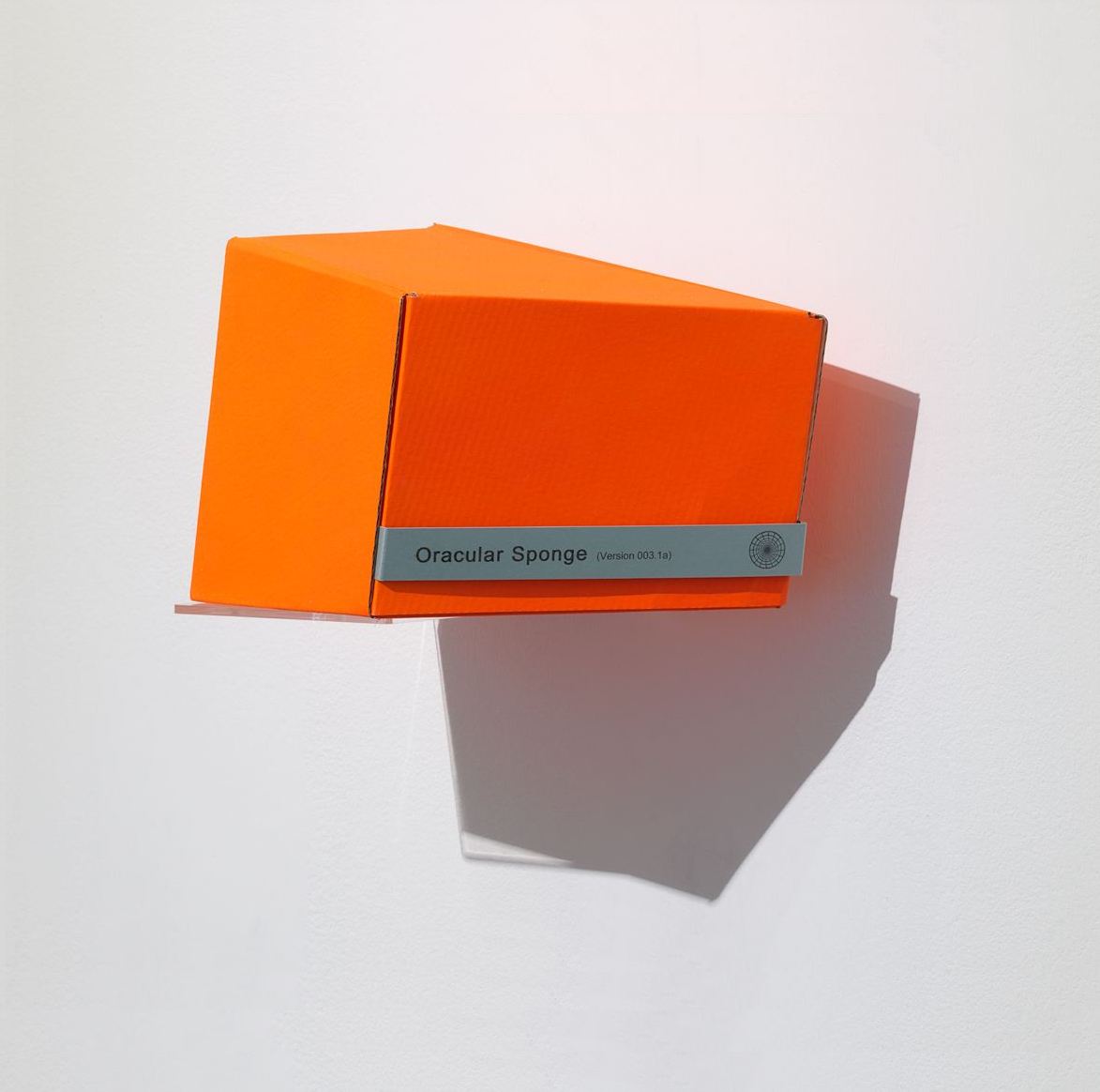 The School of the Event Horizon, Oracular Sponge. Photo by Original&theCopy.
Each work conveys a potential narrative (talk about an encounter or problematic) linked to a specific and extensive research. They also possess a sensibility towards ungraspable phenomena. The members of The School of the Event Horizon engage with an elusive, and mysterious entity, the idea of the black hole. As a starting point they “harness their propensity to warp and mutate space-time”. In her research Cathy Haynes draws upon different sources, stories and anecdotes to unravel various ways of understanding time throughout history. Time maps and other devices help to open up divisions between fields of knowledge that limit our sense of permission to explore. In his work Andrea Zucchini explores the paradoxical relationship between spirit-psyche and matter, and point to a reality beyond, in which they are no longer distinguishable. The physical, chemical and psychological reactions that occur on a molecular and cosmological level are used as a platform of the investigation.Kentaro Yamada’s pieces often implicate the relationship in between the body and the work. He puts on display the relations and exchange between the old and the new, the original and the copy, and what these manifestations suggest to the mind. Exploring the tacit existence of objects with an acute sense both of materiality and the transient, Fay Nicolson’s marginal notes point to an abundance of options, highlighting the importance of chance encounters. 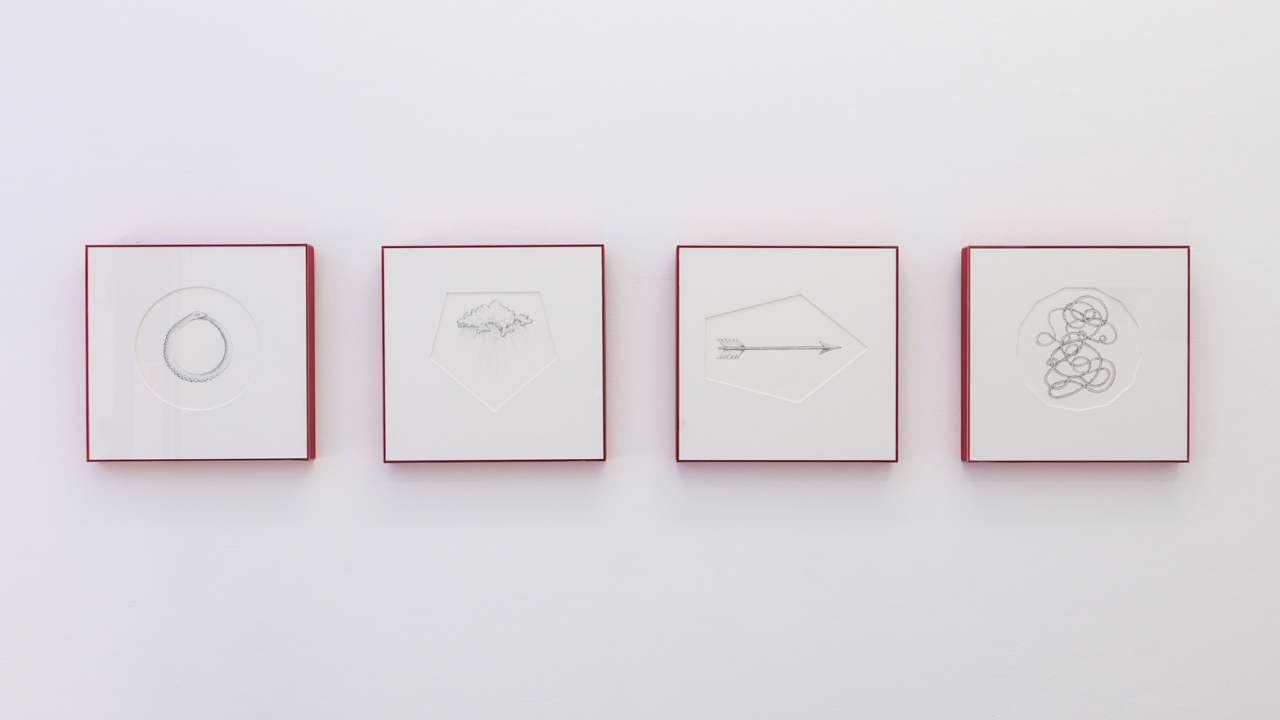 Cathy Haynes, Four Geometries of Time.Tenderpixel Gallery.
'[...] and there under a furze bush had found a very remarkable piece of iron. It was almost identical with the glass in shape, massy and globular, but so cold and heavy, so black and metallic, that it was evidently alien to the earth and had its origin in one of the dead stars or was itself the cinder of a moon. It weighed his pocket down; it weighed the mantelpiece down; it radiated cold. And yet the meteorite stood upon the same ledge with the lump of glass and the star-shaped china.'
– Virginia Woolf: Solid Objects, A Haunted House, and other short stories


Holding reference to the oscillation between two or more different states as the pieces foreground the fleeting and the unknown, they exist in the threshold between appearance and disappearance and point to a sphere beyond the immediately visible: be it a dream, a potential second part, or another manifestation of the material that had a different set of connotations at one point in history. 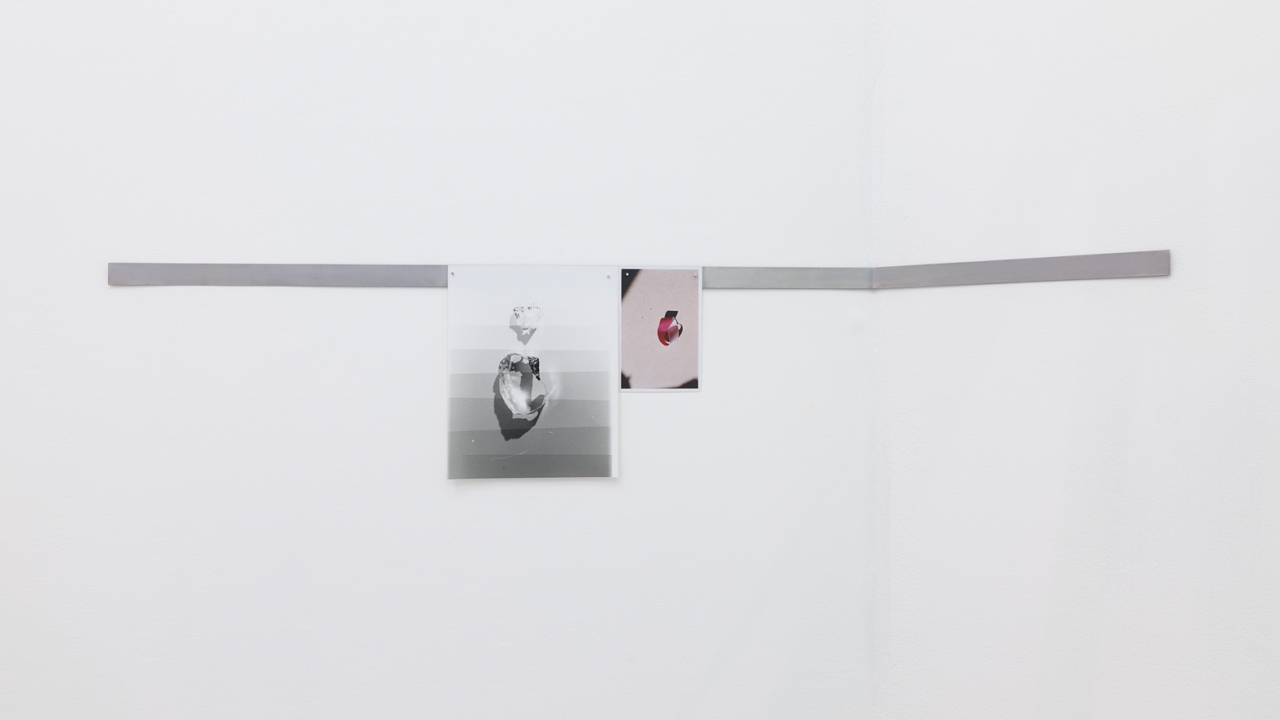 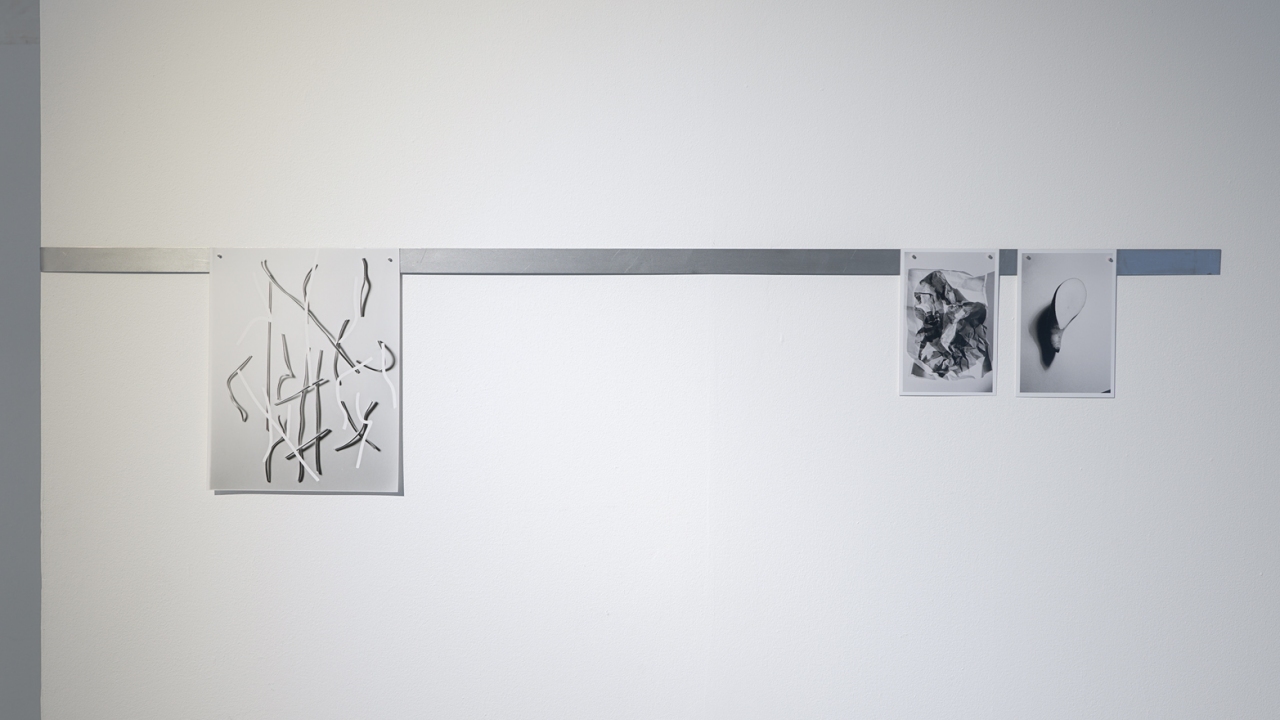 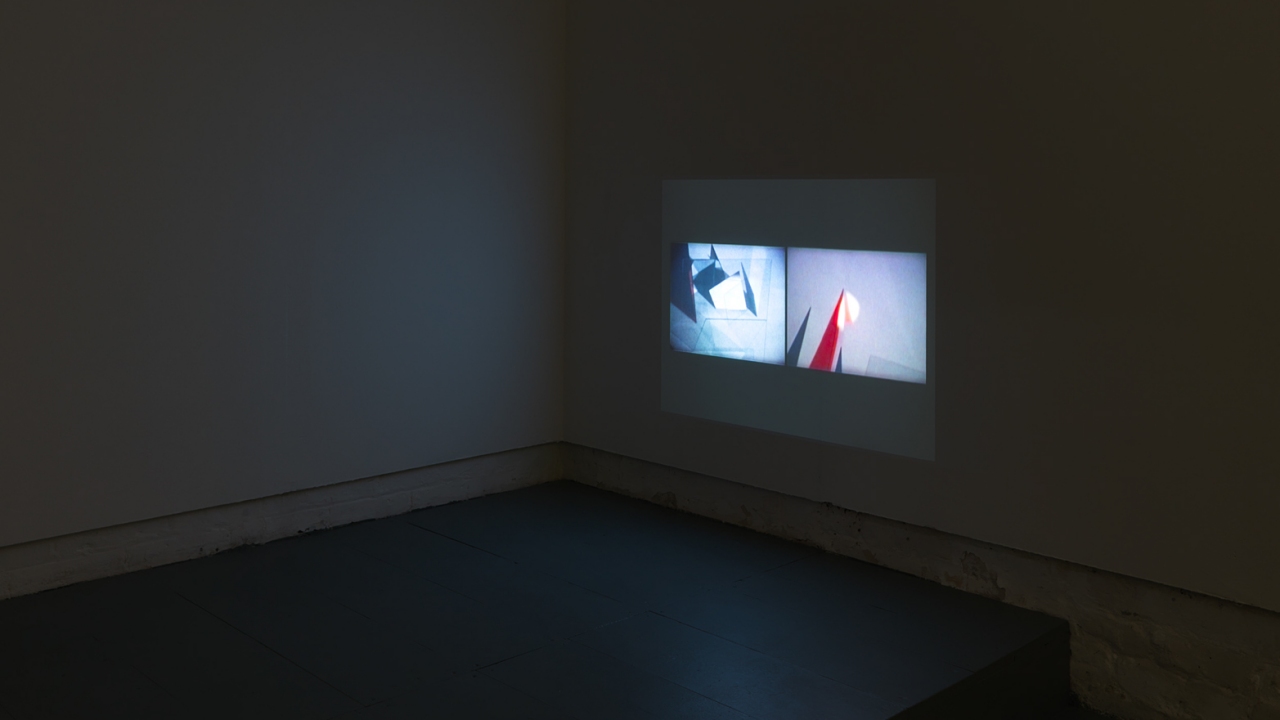 CATHY HAYNES (b 1973, lives and works in London) is an artist, curator and writer. She holds an MPhil in History (2006) and MA (dist.) in culture studies and critical theory (Media & Communications, 1997), both from Goldsmiths University of London. She received her BA (1st Class) Social and Political Sciences from Cambridge University in 1995. She is a founder faculty member and the former Curator at The School of Life. Previously she was Curator for Art on the Underground, London, and Head of Interaction at Artangel UK. Recent projects and exhibitions include Chisenhale Gallery's artist in residence in Victoria Park, London UK developing the research project, Stereochron Island, throughout spring/summer 2014; Tomb, Shrine, Survey-Marker, Spare Part, Enclave, London UK; before breakfast we talked about the furthest visible point before it all disappeared, Tenderpixel, London UK; CHRONOVISOR : ARCHIVE, South Kiosk, London UK(all 2014); A Storm is Blowing, UCL Petrie Museum, London UK (2013); How to Map a Life, Rongwrong Gallery, Amsterdam NL (2012) and No Such Place, QUAD, Derby UK (2010). From 2006 to 2009 Haynes collaborated with Sally O’Reilly to make Implicasphere, a serial mini-publication distributed inside Cabinet magazine.

THE SCHOOL OF THE EVENT HORIZON (Steven Levon Ounanian, Kate Pickering and Emily Rosamond) began their collaboration during a residency organised by Peer Sessions at ASC Studios & Gallery Space, London, in March 2014. The residency resulted in the exhibition True Stories from the Event Horizon in early April 2014. As part of the Artist Village, Brockley launch in May 2014, the School continued working together, offering Time-Distortion Writing Workshops to the public.The School attempts to harness the black hole’s propensity to warp and mutate space-time. It examines the application of extreme gravitational force to objects of study, to the point at which these objects condense, break down and re-combine with other objects. In such states, relationships between ideas and their material substrates become liquid: both tend toward pure information. In the process of this liquefaction, waves of fiction ripple through objects, reworking their histories and futures. Time becomes elastic and reversible.

KENTARO YAMADA (b 1978 Fukuoka, Japan) holds an MFA (dist.) from Goldsmiths University of London (2011) and an MFA from The School of Art Institute of Chicago (2009). He received his BA at Elam School of Fine Arts, The University of Auckland NZ in 2006, and his BFA in Science from University of Auckland NZ in 2000.Recent solo exhibitions include b.d.b.d.b.d., MARS!, Munich DE (2014) and RM103, Auckland NZ (2008). Recent group shows and projects include All That Is Solid Melts Into Air: From Interactive To Interpassive, Gallery Momo, Tokyo JP; Tacit Material, RM, Auckland NZ; MC Live II, Van Horbourg, Zurich CH (all 2013);Open West Award, Gloucester UK (2012); Face of The Shape, La Scatola Gallery, London; S.A.G.S., The Woodmill, London;BYOB, Munich DE; Symbiosis, Hoxton Art Gallery, London (all 2011) and Lucky Dip, The Woodmill, London (2010).


http://tenderpixel.com/exhibitions/before-breakfast
Back to top
This site and the third-party tools involved make use of service and analysis cookies. It is possible to refuse the use of cookies but, in this case, some functions of the site may not be available. In case of refusal, only technical and functional cookies will be used, subsequently automatically removed within 24 hours from the end of navigation. It will be possible to modify your choice later through the Cookie policy link, present at the bottom of home page.
INFO     REJECT     ACCEPT