ANIMALS OF YOUR LIPS 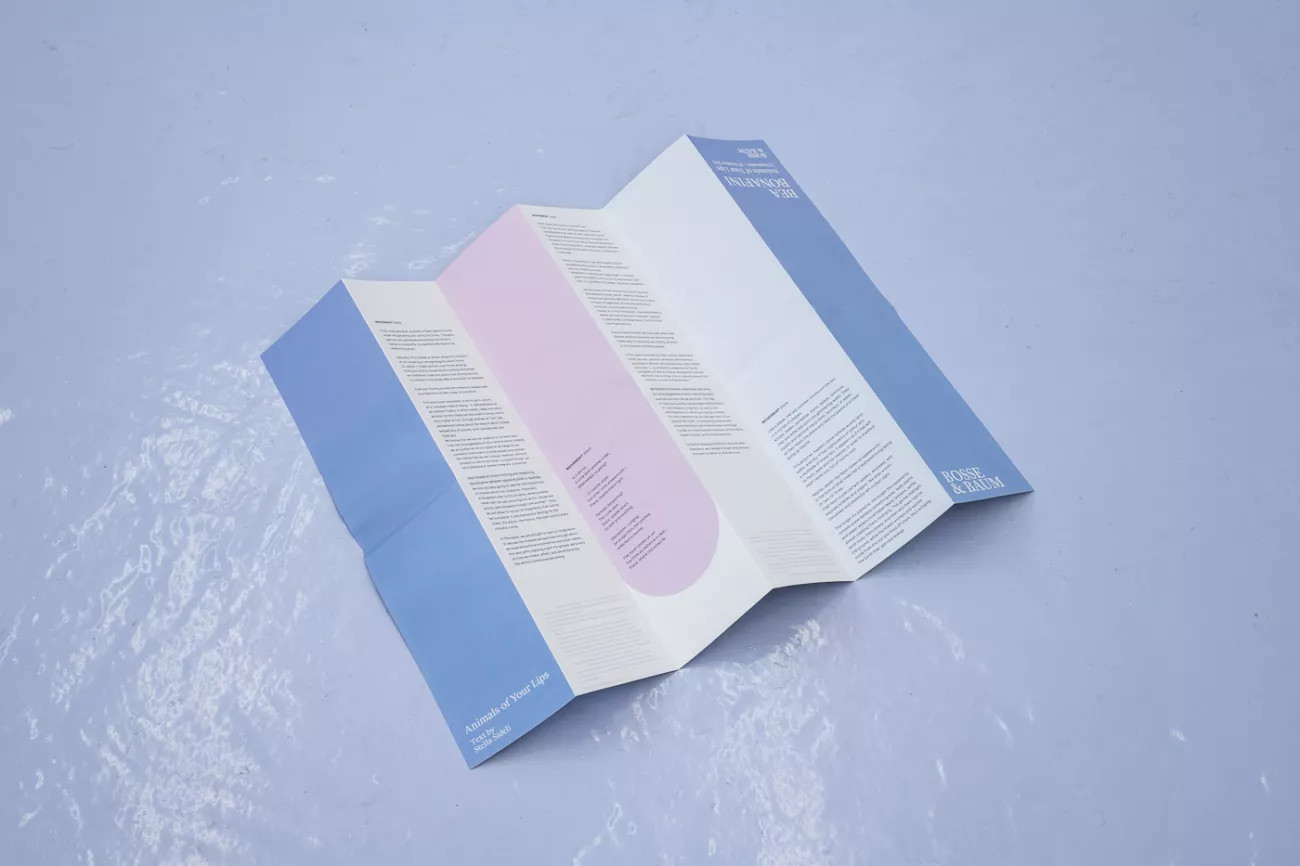 ANIMALS OF YOUR LIPS (1)
Written by London-based curator, writer and researcher Stella Sideli

Every now and then, Summer's Teeth poke my brain under the glittering sun, softly but firmly. Thoughts spill out and permeate everything that there is; matter is constantly reorganised and becoming everything (else).

Naturally, this creates a certain sense of confusion, of not knowing or recognising any exact forms. Or, better, it might be that novel forms emerge from past forms, therefore articulating themselves on a different trajectory every time simultaneously, in contrast to the linear idea of evolution for example.

Even just moving around here means to always take on a new form at every step, to transform.

This microcosm embodies, in all its parts, a kind of in-between state of being— in-betweenness as an inherent fluidity in which bodies, ideas and other entities cannot simply be discussed in binary terms.

As a matter of fact, through Animals of Your Lips, we become curious about the ways in which bodies exceed any structures, both conceptually and materially.

We realise that we are not superior to, or exist apart from the entanglements of the material world; instead, we are pulled out of our place of privilege by our symbiotic relationality to other bodies and entities. We realise that we are 'viscous' material, a kind of process by which the 'other' courses through 'us' (2) as a populace of bodies integrally connected.

And instead of simply noticing and measuring the distance between opposite poles or dualities, we are naturally going to care for the rhythm that is created within the collective, rhizomatic arrangement that is this situation, where scenes never rest, but are reconfigured within, dispersed across, and threaded through one another.(3) Here, we will allow for an act of imagination that cannot be ours alone. It simultaneously belongs to the crows, the plants, the moons, the teeth and to every colourful corner.

In this space, we are brought to use our imagination to decode the multiple perspectives through which we experience the environmental and social realms: this way softly opening a path for greater sensitivity on how we inhabit, affect, and are affected by the world’s continuous becoming.

Here, materials have a life of their own.

The Clay has shrunk, leaving space to Steel and revealing the inner part of what looks like a plant- flexing simultaneously inwards and outwards and sideways. It's hard to say what they are adjusting to, these little strong plants, or longing towards. Perhaps the movement of the earth, the wind, or whatever’s in-between.

Matter is mysterious, it has infinite performative possibilities and it exists in simultaneous separation and unity. Nothing is fixed.

Materiality is a doing that creates itself.(4) A constant state of possibility is at the core of everything in sight here, in a revelation of a deeper, tentacular complexity.

Like the Furies, all that there is here resists figuration and demands myriad names(5), rejecting the idea of borders and absolute definitions. Borders are inherent to logics of separation, division and practices of extraction, inclusion and exclusion.

Instead, as in the Chthulucene, utter entanglements defeat any kind of binaries or divisions: up/down, inside/outside, centre/periphery, nature/culture, individual/collective.

Everything perceivable here plays with what these binaries entail and explores how everything that makes them is connected and shifting, vibrating on simultaneous scintillating planes.

In this space, the essence of light, colours, dimensions, forms, textures, positions, beingness and meaning is accessible in different yet righteous ways, with multiple outcomes: '[…] a dis/orienting experience of the dis/jointedness of time and space, entanglements of here and there, now and then, that is, a ghostly sense of dis/continuity, a quantum dis/continuity’.(6)

Being attentive towards relationships and caring for the entanglements in which everything exists, becomes the most natural way to act. This type of thinking and world-making implies the formulation of a new solidarity, a new form of care for the interdependency in which everything is created. This ethic demands that we stay open and curious towards the “other”, re-entangling ourselves with a more meaningful and compassionate cosmology(7) in order to reveal the plural dimensions of life matters, hidden histories, and plural perspectives.

And while language stretches to accommodate experience, we manage to loosen what we know and open ourselves to what we do not.

Is it denial,
A crow asks another crow,
What keeps us going?


- Or maybe anger,
The other crow answers him—
There, maybe that’s right…


Perhaps bargaining?
The crow says. Tears, upside down,
So soft and soothing


Depression. Longing
for a sign from the cosmos,
reflected on leaves


The moon shines on us!
You think acceptance is near…
There, where the crows lie.

Like a Blade, the late summer moons cut the sky in a myriad of shapes.

Knives, beaks, vertebrae, horns, spikes. Ominous, they are reflected upon the glimmering water. They liquefy and become many more, formless, in water, as they reach the shore and feed the plants and trees going up the hill.

This airborne, majestic spine unfolds across land, water, and sky; it has raging veins of colour and a multitude of sharp tips. It appears as if it has left its flesh, eyes and hair behind, in order to manifest itself inside-out, full of thorny void.

Nearby, pastel-like flesh makes an appearance, in the form of what looks like a feathered living being. Or two. Or three.

Their flesh is pierced with spears, wounded, with exposed arteries and organs: like after a hunt, carcasses and skeletons left in plain sight.

The longer it’s stared at, the longer this apparently sombre scene exhibits something else: leafy plants and sweet waters hold these fleshy remains, softly; almost cradling them, motherly. The gentle midnight wind rocks them slowly, and then lets them rest on the ground, while the tiniest animals and worms come from the soil and feed off them, thus bringing the Earth their glorious energy.

(1) “Animals of Your Lips” is the title of Bea Bonafini’s exhibition taking place at Bosse & Baum from the 23rd September to the 29th October 2022.The exhibition features a new body of work, and is predominantly installation based. Materials include ceramic, textile, wood and steel. This title comes from Anne Sexton’s poem “Unknown Girl in a Maternity Ward”: a carnal and tender tale of a young mother’s animal relationship to the otherness of her newborn. The poem articulates grief as the child is given away; the loss of life or flesh, or the loss of a body as we know it, and having to adjust to new forms of bodies, their metamorphosis, or what’s left of them. 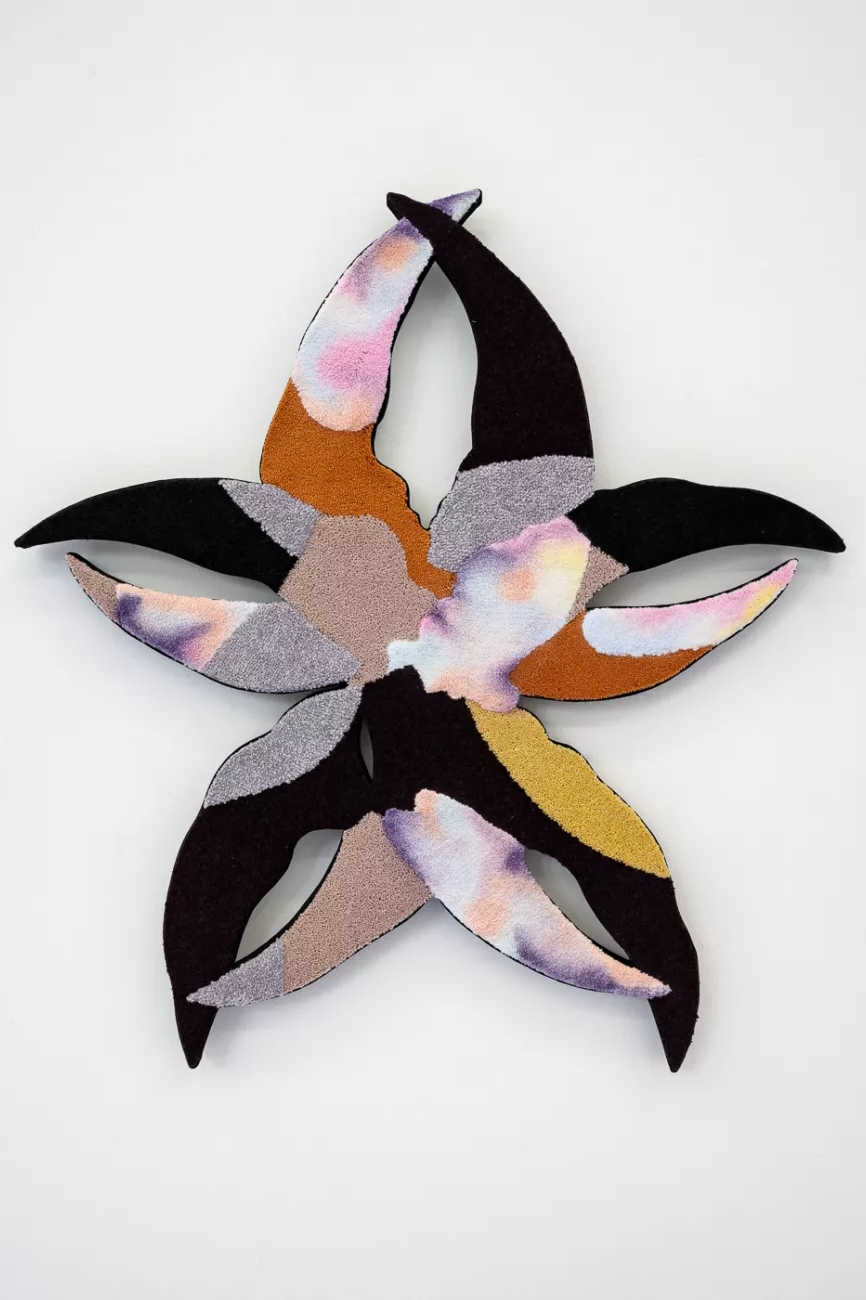 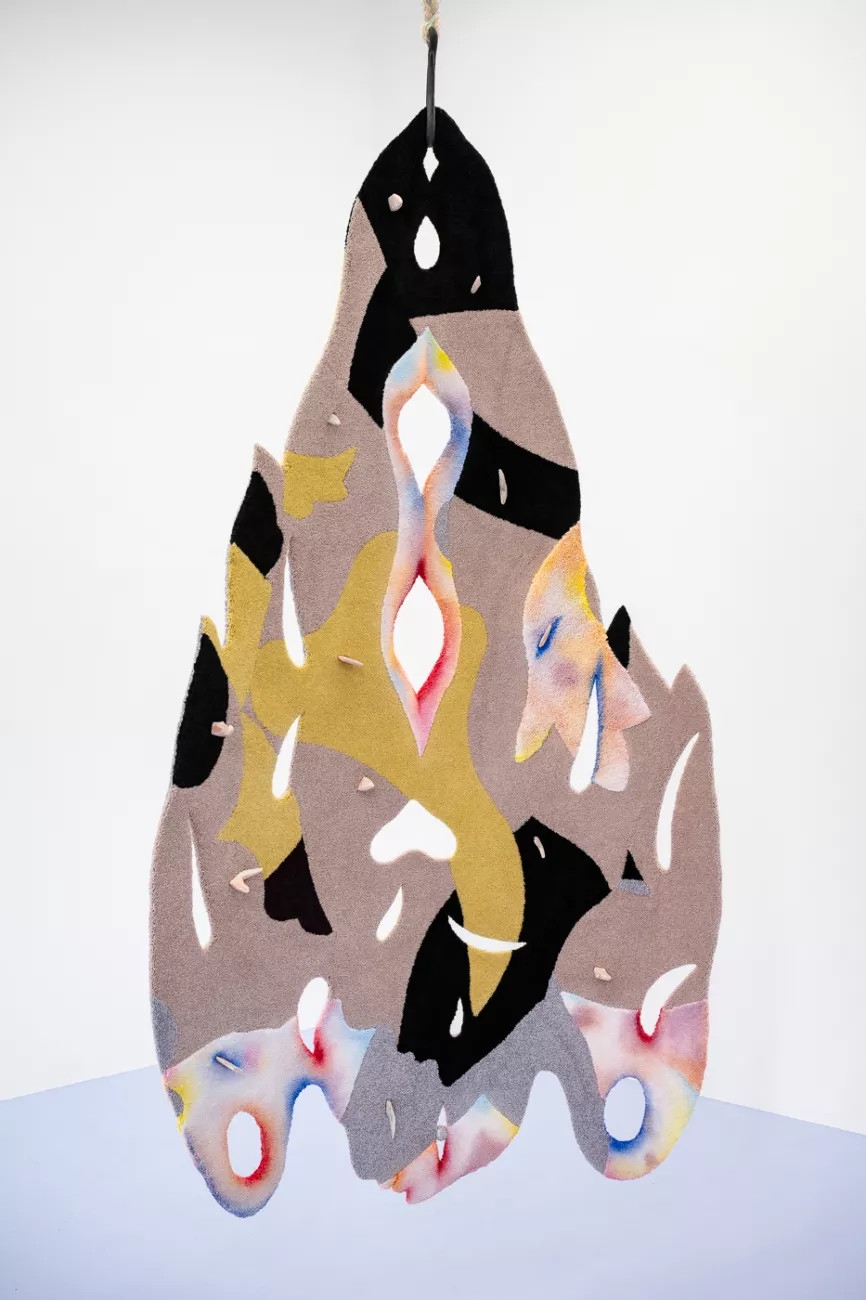 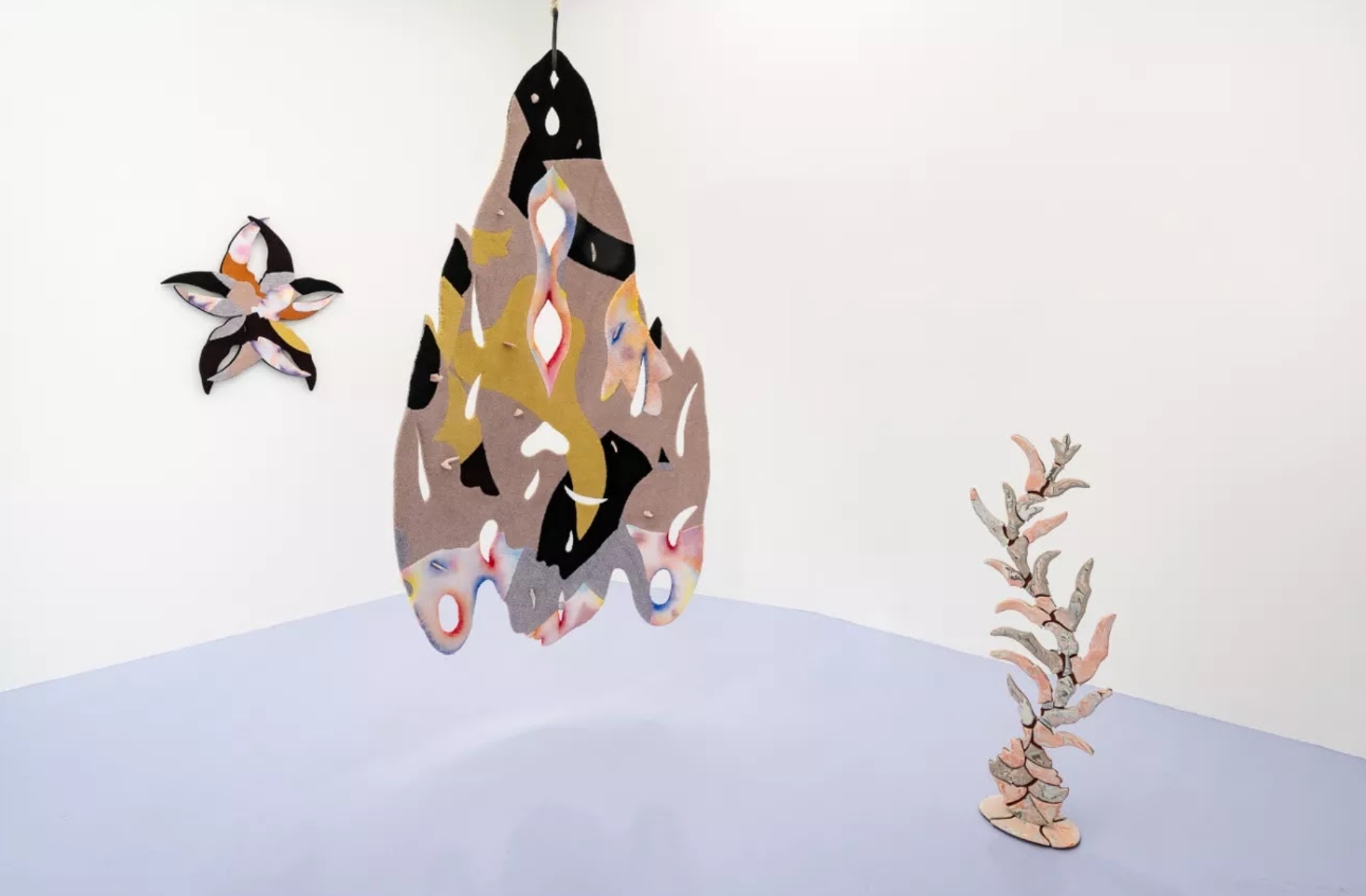 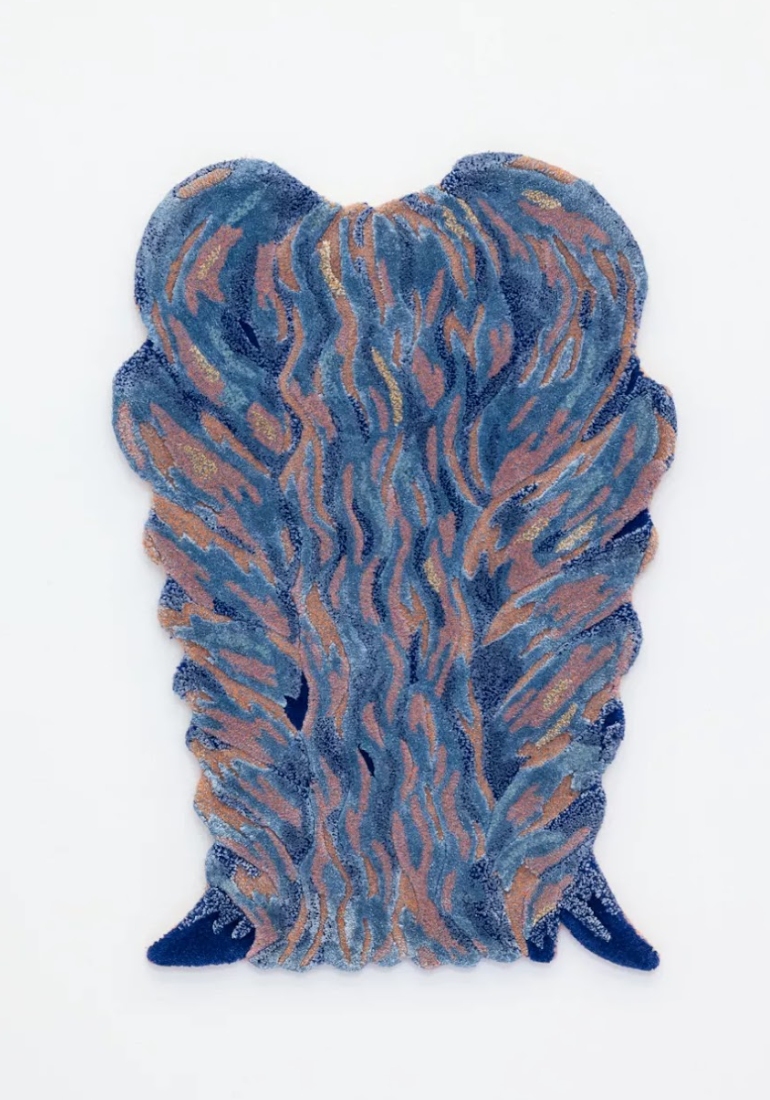 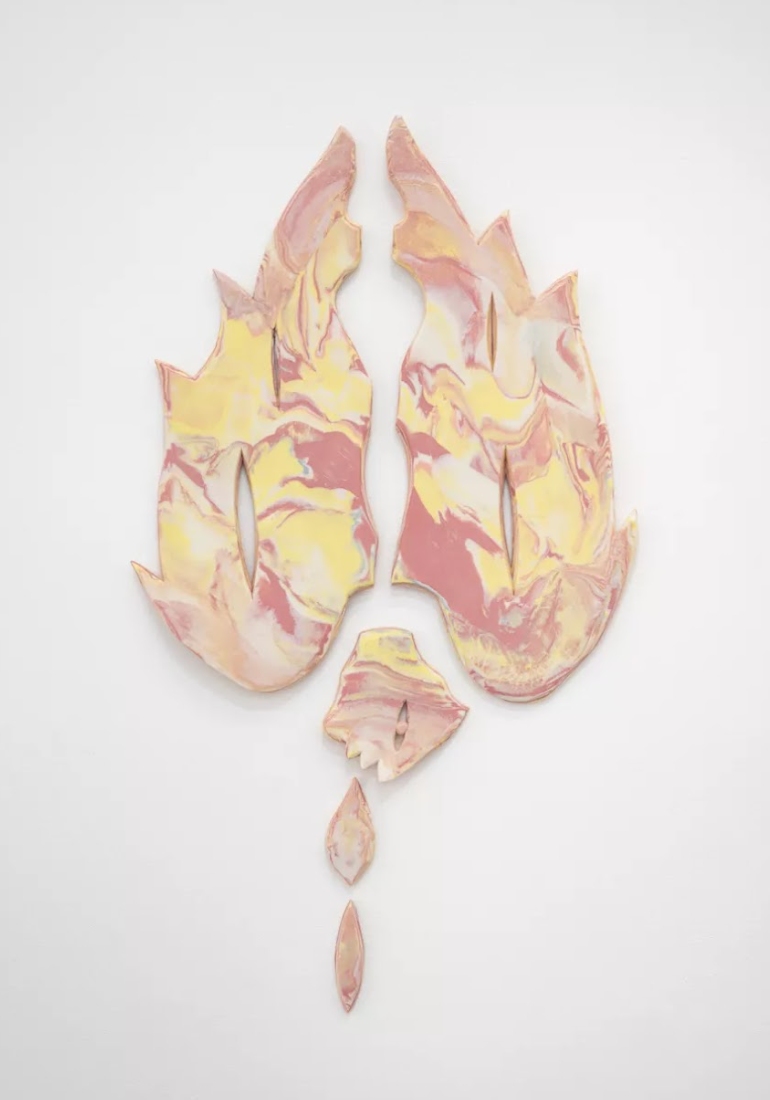 Bonafini’s work expands the possibilities and interplay of painting, tapestry and sculpture. Holistic perspectives are developed in close dialogue with architecture, where works are expanded in space to envelop the viewer.